If you ride a heavily loaded bike, then a double-leg kickstand is almost essential. A key feature of our Porteur model is that the two legs spread as the kickstand is deployed and close as it's raised. This makes for a very stable stand that doesn't interfere with pedaling. The leg extensions, which look like rubber boots, can be adjusted by twisting and pulling or pushing, so the legs are the perfect length without cutting.

A top plate and a long mounting bolt are included, so they fit most bikes with, or without, kickstand plates. For instructions on installation see our blog post here.

For bikes with derailleurs, use the Copenhagen Kickstand.

Great addition for my ride. Good looking, well made, and easy to install. 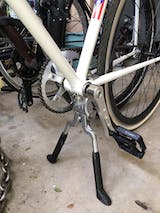 C
C.
A good center kickstand with a few issues

This is a kickstand that I've been using for a few years on a single-speed 26" mountain bike. The bike in use is one I use as an urban utility bike that hauls loads on front and rear racks with panniers. My only complaint about this is that the length adjustment screws don't hold very well so that I've have to manually adjust the lengths of the arms of the kickstand.

I bought one of these probably nine years ago to keep an '80s touring bike upright while I loaded and unloaded with a baby seat on the rear. There was a learning curve to setting it up, and I wasn't able to get the legs up as high as I wanted (chain clearance issues with a long cage rear derailer and ~11" BB height), but once I got it arranged, it worked great.

Fast forward several months, and I acquired a tandem to ride on with the now two kids. I swapped this over along with the baby seat, and found it even more brilliant for setting the tandem on while I loaded *both* kids. Having higher ground clearance and longer chainstays did seem to help, and the side to side retraction is surely a clearance advantage over fixed twin leg stands that only swing up. This is sturdy enough that the bike can stand on it while the crew mount up, and then you just roll the bike forward off of it and the stand retracts fully with a small kick. Lift up on the stoker seat (even with a child stoker on it), kick it down and roll the bike backward, and it deploys!

Most recently, with a third child in the family, my two sons are riding the tandem together, with the now 12 year old as captain, and he finds this stand every bit as capable and handy as I have.

Back To City Accessories