Lately my inbox has been overflowing with questions about bottom brackets. So I thought I'd write this simple guide that I can later forward to those seeking advice. Of course, this is only about square taper cranks and BBs. 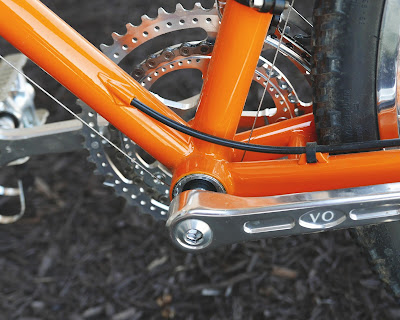 I often get questions such as, "What is the proper BB spindle length for a 1954 Urago mixte?" Come on; I'm not Sheldon Brown! In any case, the length of your BB spindle is determined largely by the model of crank you use, not by the type of bike. Every crank's manufacturer recommends a BB type and length. Of course, if the crank is long out of production, a lengthy conversation with Google may be required to find the specification.

As with anything, it's not quite that simple. There are a couple of other factors that can influence spindle length. If your bike has particularly wide chain stays, such as those on a mountain bike or a loaded tourer, a longer spindle may be require in order to ensure that the crank arms clear the chain stays. Often, the only way to be sure is to install the crank and see if the  BB works. If not, measure the interference or gap and buy a second BB. Unfortunately BBs that have been installed are not returnable, but there is always E-bay. The other factor that might influence spindle length is BB spindle taper.

Spindle taper
The vast majority of square taper cranks uses either an ISO or a JIS taper. Basically, the angle of these two types is almost identical. It's just that a different portion of the taper is used, as I've tried to show in my sketch. 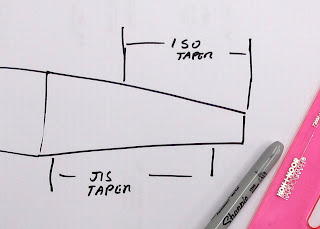 For the most part, only Italian frames use ISO today. The rest of the world uses JIS. But there are exceptions, such as the top-of-the-line Sugino track cranks; all other Sugino cranks are JIS. Some older cranks from Stronglight, TA, and other European companies also used ISO tapers. Only Ofmega and Avocet, of the major manufacturers, used a proprietary taper.

It's usually possible to fit an ISO crank on a JIS BB. The only caveat is that the crank will be 3-4mm wider than if an ISO BB was used, so pick a slightly narrower spindle and tighten the crank bolts securely.

I don't recommend using a JIS crank on an ISO spindle because the crank may bottom out, thus permanently ruining the taper. If, however, you are careful, it will work with some combinations.

One of the problems with this whole idea is that manufacturers sometimes take a casual attitude toward  following one standard or the other.  I have seen TA cranks, for example, that appear to be ISO and an identical crank that's JIS, or perhaps something in between.

BB threading
Let us begin with the French standard because this is, after all, Velo Orange. The French decided that BB shells should be 68mm wide, threading should be35mm x 1mm, and both cups should tighten to the right. Simple and effective! Of course, VO makes French Bottom Brackets.

The Swiss, improved the French standard by reversing the thread on the drive side. This became the Swiss standard and was adopted not only by Swiss manufacturers but also by a few French companies, notably Motobecane. (Motobecane also used French threading on occasion and later switched to British threading; good luck.)  The BB shell is 68mm wide and also threaded 35mm X 1mm; but the left cup tightens to the right and the right to the left.

The reason for this improved standard was that the spinning of the crank was thought to loosen the right-hand thread non-drive BB cups. After a few decades, the Swiss noticed that French cyclists, in fact, were not stopping every few miles to tighten their cups. And so the standard was quietly abandoned. The only Swiss threaded BBs made today are the super expensive Phil Wood units. But VO does have a Threadless BB that is a less expensive alternative.

The French standard was also eventually abandoned and, to the everlasting annoyance of the French and of francophiles everywhere, the British/English (or ISO) standard became the world standard. If your classic frame was made in America, Japan, Taiwan, Germany, or Britain, it almost certainly accepts a English threaded BB. This standard is 1.375" X 24 tpi with the left cup tightening to the right and the right to the left; the BB shell is 68mm wide. All VO frames use an English Threaded BB.

Not leaving well enough alone, some British manufacturers, particularly Raleigh, came up with other standards that are outside of my understanding, as did some old American manufacturers.

Finally the Italians, who we reluctantly acknowledge do know something about bicycles, if only the racing sort, blithely ignored everyone else and stuck to their own standard. The Italian BB shell is 70mm wide and has 36 mm X 24 tpi threading; both cups tighten to the right. VO makes Italian Threaded BBs in sizes to fit our cranks.

Speaking of Italian BBs, I should note again that at least one company, Ofmega, used there own propitiatory axle taper. They also made Avocet cranks which use the same bizarre standard. A regular taper won't work. I know this since I destroyed an Ofmega crank on my old race bike by trying it. Find a BB on E-bay if you have one of these.
Damaged BB shells

If the threads on your frame's BB shell are cross threaded, stripped, or otherwise damaged you can use the VO threadless BB that I mentioned earlier. Taper is JIS. We have used these on British, French, and Swiss BB shells and they work perfectly. Customers report that they also work in Raleigh frames with a 71mm wide BB shell. These BB's won't work on mountain bikes, as their standard width (73mm) is too wide for the shell to expand. They also do not work on Italian threaded BB shells because those have a wider ID.

So there you have it, a gross oversimplification of BB standards that should, nonetheless, provide sufficient information to fit 99% of traditional frames with BBs.